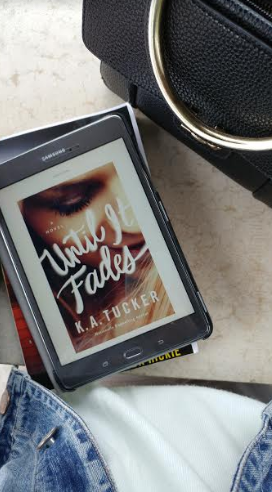 I am absolutely thrilled to be on the Until It Fades blog tour today celebrating the release of K.A Tucker’s newest novel!

KA Tucker has quickly become one of my go-to authors.  Not only does she in Canada (oh hey!) but I love how her titles have a Colleen Hoover vibe with an edge.

Genre bending structure, complex characters and the perfect amount of romance and tension make me devour her novels whole.

Her newest novel, Until It Fades, brings around the softer side of Tucker and reads like a new adult or contemporary romance novel. It follows Cath Wright, a single mother and truck stop waitress, who has been doing her best to live her life under the radar. After she ended her teenage years being the talk of her small town, she wants nothing more than to blend in and move on. That is, until one foggy night, she saves a man’s life. Soon, the media is at her door and it isn’t then until Cath realizes whom she has saved: Brett Madden, a hockey icon. Their friendship is immediate and soon Cath finds her feelings developing into something more, something she is afraid of and something she feels she cannot trust.   Because how long can a man like Brett be into a woman like Cath….before the spark fades?

END_OF_DOCUMENT_TOKEN_TO_BE_REPLACED 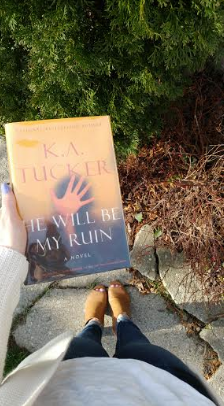 He Will Be My Ruin by K.A Tucker was a book that had been on my TBR list for a long time; I can’t believe I went this long without having read any of her work! Captivating, fast paced and well-developed characters made this one hard to put down.

The novel opens with a woman trapped in the trunk of a car and the reader is immediately sucked into the action. Talk about an opening! After this bang, we retreat backwards a few weeks in time where Maggie Sparkes arrives in New York to pack up the belongings of her best friend, Celine. After the police deem Celine’s death a suicide, there isn’t much to do but mourn the loss of her life and try to move on. However, when Maggie discovers a scandalous photograph hidden in Celine’s apartment and Celine’s diaries, the wheels begin to turn. Who is the man in the photograph? Why won’t the police take Maggie’s pleas seriously? What was Celine up to? As Maggie digs deeper into Celine’s last few months, she becomes closer to danger, and maybe, the same man who ruined Celine, will be Maggie’s ruin as well….

Equal parts thriller and romance, this book gave me what I felt like I was missing in some of my more recent reads. Tucker has an uncanny ability to weave both genres together effortlessly; I found myself completely sucked into the plot.   From the get go, this novel felt ominous and this was portrayed throughout the narration. Narratively, this one is told through Maggie’s present and then through Celine’s diary entries. I loved this style! Maggie’s desperation and Celine’s downfall had me on the edge.