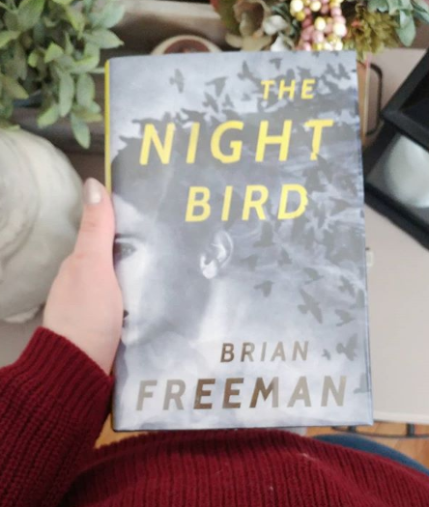 Last year, The Night Bird by Brian Freeman, was a book that I saw often. Several bloggers had posted about the book, it came up constantly when scrolling through my suggested reads on Amazon and, finally, in the Goodreads Choice Awards. I figured this was a sign that I needed to add this book to my TBR pile.

While picking my books for the Popsugar 2018 Reading Challenge, I was sure to fit this into my rotation (prompt 26: a book with an animal in the title) and picked it up on January 1; now that I have finished this book, I feel like a fool. I should never have waited to read this book!! The Night Bird had everything that I look for in a compelling read: an intriguing protagonist, a creepy killer and a hypnotizing plot. I could not put this book down.

The novel opens with the introduction of a homicide detective, Frost Easton. He is a jack-of-all-trades type of cop who has committed fully to the police force after the murder of his sister. When two, unrelated young women die, in what seems to be some sort of psychotic break, Easton leads the investigation and discovers something far more sinister. Both women have one thing in common: they both when through hypnosis to relieve themselves of crippling fear and they both were patients of the same doctor. Francesca Stein’s therapy is controversial but effective; she stands by her methods until she starts to receive threatening messages from someone named The Night Bird and realizes that the deaths of her patients were not coincidental. As time begins to run out, this gifted doctor and the devoted police officer must come together to try and stop the cunning killer before he claims another victim.

Now, I am not one for lengthy plot descriptions in my reviews but I cannot get over how DIFFERENT this novel was. I loved the concept of the hypnosis, memory changes and the mind control. The psychology of this fascinates me and I felt like Freeman did an excellent job with his portrayal. I have read other books with the memory/mind control type of spin and, in the end, it usually ends up feeling a little bit like sci-fi. I never felt that way during my reading.

As for characterization, Frost Easton reminded me of the detectives I have been loving recently: Sam Porter from the 4MK series by J.D Barker and William Fawkes from the Ragdoll series by Daniel Cole. Young, a bit jaded and seriously smart, Easton was extremely likeable and I found myself rooting for him entirely. I also loved Francesca “Frankie” Stein. I am all about a strong, female character giving the big, bad detectives a run for their money!

Overall, I LOVED this book and cannot wait for the second book in the series, The Voice Inside, to be released later this month. You better bet that I will be moving that to the top of my TBR pile!