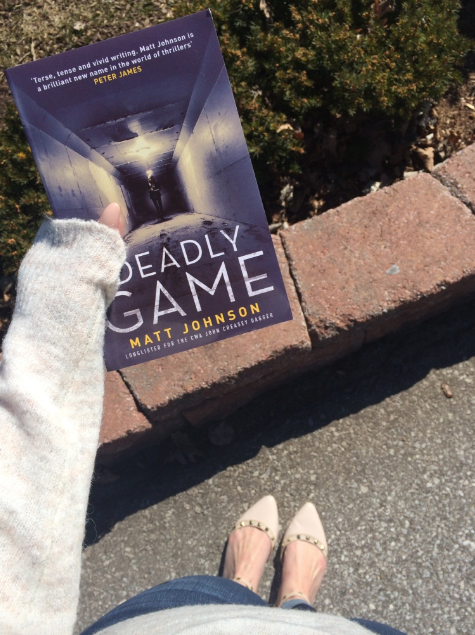 Thrilled to be today’s stop on the Deadly Game, by Matt Johnson, blog tour! After reading Wicked Game (you can read my review for that one here), I was so excited to pick up where I left off and dive back into Finlay’s realm. As soon as I saw that this novel would surround Robert Finlay investigating the East European sex-slave industry, I was intrigued. I couldn’t wait to see what Finlay would do in such a dangerous, underground world.

Although the second book in the series featuring Robert Finlay, this one could be easily read as a standalone. Johnson opens the novel with the first few chapters featuring the police report highlighting the events in the entire first book. I loved this feature; Johnson takes the time to inform his reader of Finley’s past completely directly instead of slowly weaving and leaving bits of information.  I love when an author is direct and helps to set the stage for what will unfold.

The novel opens with Finlay, living in a safe house with his family, returning to work and almost instantly getting wrapped up with a prominent family that is involved in human and sex trafficking in Eastern Europe.   While on the trail of this case, Robert is also dealing with the repercussions of the last novel and the demons of his past that are still threatening to harm him.

I have mentioned several times on Clues and Reviews, especially lately, that I have become a bit weary of police procedurals. I am struggling with their monotony. I am happy to say the plot of Deadly Game seriously breaks the mould. The sex trafficking investigation was so interesting as a lead case; I was completely consumed. The writing was fast paced and non-stop.  Every time I felt like things were slowing down, Johnson would flip the switch and send me barreling into a new direction.

Unlike Wicked Game, which relied heavily on physical action and narrow escapes, Johnson focuses acutely on the psychological and strategical responses of the characters in this novel. Smart, intricate and tightly woven, Johnson’s prose had me reeling.

Overall, if you enjoy military thrillers or an action thriller with strong political ties, you’ll love this one.  My advice? Make sure you have ample time to read this one; once you start, Johnson barely leaves time for your to catch your breath, let alone take a break!!  I rated it 4/5 stars. 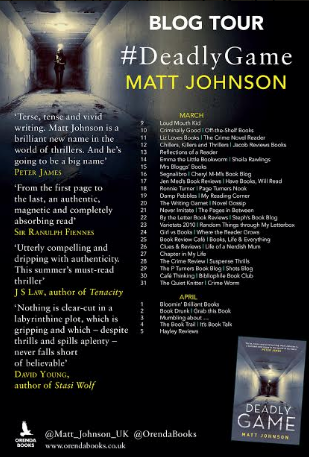 Thanks to Orenda Publishing for a copy of this novel; it was my pleasure to provide an honest review.