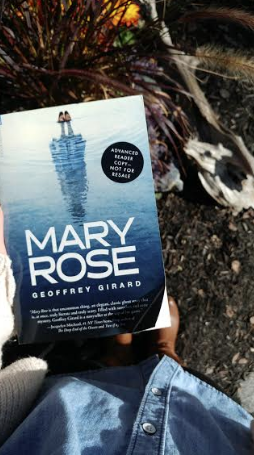 I am such a sucker for a horror read as soon as October hits. I want to grab a cozy blanket, cuddle up in my sweats and scare myself silly. With this in mind, I began to compile my October lineup, and my picks for #cjsreads, one of which was Mary Rose by Geoffrey Girard. Going into this novel, I wasn’t really sure what to expect, but I was intrigued by the description of this novel being “a chilling and modern take on a classic ghost story”. I was also intrigued when I found out that the premise for the story was actually written by J.M Barrie for a film adaptation by Alfred Hitchcock; not sure what went down with that but I figured there was nothing more chilling than films by Hitchcock, so, if he deemed this story worthy of film, then I needed to check it out!

The general premise brings us Mary Rose and Simon, a couple of working professionals, who are about to be engaged. They travel to England to ask for Mary Rose’s hand and Simon’s plans are slightly derailed when he finds out that Mary Rose disappeared when she was a little girl and then randomly reappeared thirty-three days later with no memory of her time away or knowledge of where she was. Not only does this give Simon the heeby-jeebies, but he becomes obsessed with trying to solve the puzzle of where she could have been and what could have happened.

Would I call this a traditional ghost story? Not really. Did I find some moments creepy? Absolutely! Told in alternating perspectives of Simon and Mary Rose, both characters have the opportunity to show the reader their growing paranoia and fright. I think my favourite character was Mary Rose. She is quirky, to say the least, and when she was acting strangely, I was compelled to continue reading to see what her actual deal was. Would she end up being possessed? Was she actually dead? Perhaps she was a figment of Simon’s imagination? I had no idea what the actual end game would be, so, Girard definitely had me hooked in that regard. I also felt like the general setting of the story added another chilling layer to the tone.

If I am being honest, I was a little underwhelmed at the ending of the story and I felt like maybe something HUGE was missed within the pages; in reality, I feel like maybe it would have been better received on screen, which makes sense when thinking of how this story started out.

I feel like this novel had several components, which would make a chilling tale perfect for Halloween, and, although I didn’t love the full execution of the novel, I did appreciate the general tone and feel.

Thanks to the author and the publisher for a copy of this book; it was my pleasure to provide an honest review.

Want to see what Chandra and Jessica thought of this book?  Keep reading to find out!

October is the perfect month for horror books! So when I saw the synopsis for Geoffrey Girard’s MARY ROSE, I was intrigued and I always love a good ghost story.

Mary Rose and her boyfriend Simon are a happy and successful young couple living in Philadelphia. They decide to travel back to Mary Rose’s home in England, so that Simon can meet her parents and ask for their permission to marry her. When they arrive, Simon learns some troubling details about her past. Mary Rose disappeared for 33 days, and when she returned (in the same spot she disappeared from), she had no memory of what happened to her.

Simon becomes obsessed with trying to find out to Mary Rose. He launches his own investigation into the small town in Scotland where it happened. He believes that if he can figure out what happened, then they’ll be able to move on with their lives. He hits a roadblock when no one in the town will talk to him about it.

This is told through both Mary Rose and Simon’s perspectives. She’s clearly getting more bothered and unsettled the longer they stay in England, and then when they travel to Scotland. Simon is purely focused on finding out what really happened to the woman he loves. With people opposing him wherever he turns, he just digs deeper. Will he be able to find out what really happened to her in those 33 days? I felt that the ending tied everything together very well without being unrealistic. It is definitely a ghost story, but that doesn’t become too apparent until towards the end of the book.

Overall, this was a great and creepy read. Perfect choice for October! It had the elements you want in a ghost story without feeling too overdone (if that makes sense). I enjoyed the characters and I couldn’t stop reading until I knew what happened to Mary Rose.

Meet Mary Rose. She’s heading back home to England with her boyfriend, Simon, so he can meet her parents and ask for permission to marry their daughter. He knows about her sullen moments and her tendencies to withdraw into herself at times. Upon their arrival, it becomes worse. Soon he finds out she disappeared while vacationing in Scotland for 33 days as a child and came back with no memory. He becomes obsessed in trying to find out what happened so that they can move forward with their lives but the entire island in Scotland where this happened won’t speak about it.
Interestingly, this is marketed as a “modern take on a classic ghost story”. For a majority of the book, I could not understand why. There were paranormal and occult type vibes that you could feel, but the ghost element lost me. Until the end. Then I understood. I love it when it all comes together in that A-HA moment! We see this story unfold between both Simon and Mary Rose’s points of view. He, as a lawyer, obsessively reads into everything that is going on around him and probes continuously about what could have happened on that island. We see his frustration with the other characters who don’t seem to want to help, and with her parents who just want him to help her without ever talking to her about her disappearance. I mean, why bring back painful memories, right? Through her eyes we see that whatever happened is especially bothering her the more and more she’s back at home in England and especially so on her trips to the Scottish island.

While I absolutely loved how it all came together and that eerie, creepy feeling that a good ghost story can give you, there were just a few things that just didn’t quite make sense which is why I’m torn on my ranking for this book. I am certainly ok with suspending reality – especially in a story that caters to the paranormal/Hitchcockian type feel… but there’s just one thing that I can’t get past and so I’ll leave it at this so as not to spoil anything for anyone. Feel free to message me if you’d like to know what 😉

Overall a book that kept me turning the pages to see exactly what DID happen to Mary Rose – I really needed to know! And the creepy vibe that came with this story is perfect for this time of year.