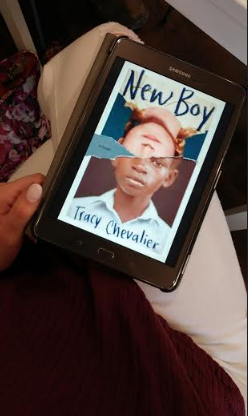 As an English teacher, it is a bit of a no-brainer that one has to learn to like or at least learn to accept Shakespeare.   I have come to love the work of the bard, but some of my teenaged counterparts would disagree with me. It isn’t easy to make a group of teens translate this vernacular.   I was so surprised that I had never heard of the Hogarth Shakespeare series before. Where am I living? Under a rock??

Making Shakespeare more relevant and accessible to today’s society, I was so excited to read New Boy, by Tracy Chevalier, which was a play on the Shakespearean classic, Othello.

I wasn’t sure what to expect going in as I hadn’t read any of the other titles I this series and have read some pretty awful Shakespeare retellings over the year, but, I must say, after finishing this book, I was impressed.

Told on the backdrop of a school’s playground in the 1970s, Shakespeare’s tragedy unfolds with an eleven-year-old diplomat’s son, Osei (known as O) and his new friend, Dee. Ian, another student who cannot seem to handle this budding relationship, decides to put a stop to it.

Anyone who is familiar with Othello will know the general direction that this novel will take but the new cast and scene breathe whole new life into this story. I loved the setting of it being on a school playground. Having taught grade school aged children, I understand that some serious drama could unfold on the playground and Chevalier uses this to weave a story surrounding jealousy, bullying, young love and betrayal.

I felt like this was a brilliant retelling and would love to see this incorporated into classrooms; I think it would amazing to have youth actually connecting to themes in Shakespeare without being bogged down by the language.

I know I will be anxiously awaiting upcoming features to the Hogarth Shakespeare series that include a retelling of Hamlet by Gillian Flynn and Macbeth by Jo Nesbo. COME ON??!!