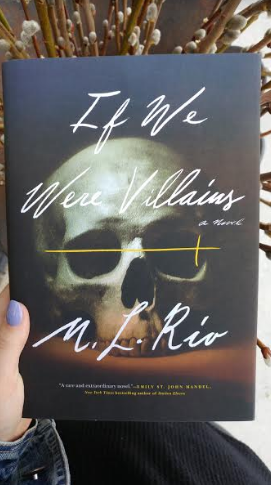 I have a real warmth for Shakespeare; I majored in English Literature while I was in University and am an English teacher, so, I was over the moon when I discovered that this text explored a modern mystery with a Shakespearean twist.

Let me just tell you, I was floored during my reading.

I could not believe this was a debut novel. I truly cannot say enough amazing things about If We Were Villains by M.L Rio. Between the text’s originality,

Between the text’s originality, fast-paced plot, complex characters and smart dialogue, I was captivated.

The novel opens with Oliver’s release from prison; after spending ten years locked away, he wants nothing more than to move on, but the man who put him away is waiting for him. Detective Colborne wants the truth and he has waited ten years for it.

Told in alternating perspectives from past and present, Oliver goes back in time to where he was one of seven Shakespearean actors in his final year at Dellecher Classical Conservatory.   Where the lines between character and self-identity blended together and competition was fierce, the friends find their world of make believe shattered when real tragedy strikes and they meet their greatest acting challenge to date: convincing every one of their innocence.

Now, do not be deterred if you loathed Shakespeare in the past, Rio’s narrative style modernises the text and although Shakespeare’s plays are quoted directly, the context of the dialogue makes everything extremely easy to understand. Something about this book was extremely magical, as it borrows some of Shakespeare’s strongest themes (revenge, murder and betrayal and madness) to create an incredible story.

There were also small details that I grew to appreciate during my reading: the chapters are called scenes, the sections are Acts and even the dialogue is sometimes written as if you are reading a play.

I will absolutely be reading more of this author’s work and consider this one a must read. It has been one my favourites, so far, this year!

Thanks to Flatiron books and the author (M.L Rio) for a copy of this novel; it was my pleasure to provide an honest reveiw.

This novel was also a #cjsreads pick!  So keep reading to find out what Chandra and Jessica thought!

After 10 years in jail, Oliver is released and the detective who arrested him sits with him to get the full story. As one of seven actors at Dellecher Classical Conservatory, acting is competitive and all consuming. These 7 are not only classmates, not only friends, but family. Consistently they end up playing the same roles. When the script gets flipped and casting changes, competitiveness gets the better of them and rivalries ensue. They face their own real life violence and their acting skills become in use to convince not only the detectives, but themselves, that they are innocent.

Admittedly I have never been the greatest Shakespeare fan. I loved seeing creations come to film and play, but to read has always been a difficult chore for me. Because of this I was wondering just how much I would like this read considering some Shakespearean verse is included. Well color me surprised. Each Part is an Act, starting with a Prologue and each Chapter a Scene. As Oliver tell his story, I am completely and utterly drawn in. The author does a fantastic job of building each character and how they react to each other and the issue at hand. This is a novel about friendship, family, betrayal, lust, love and the fine line drawn between the roles they play on stage and in life. I highly recommend.

Thank you to Flatiron Books for this incredible journey.

This was a book I went into without knowing much about it. I loved the cover and the title, so that was enough for me! I was intrigued from the first pages and that kept up throughout the whole book! Another amazing debut from a new thriller author.

“Enter the players. There were seven of us then, seven bright young things with wide precious futures ahead of us. Until that year, we saw no further than the books in front of our faces.”

On the day Oliver Marks is released from jail, Detective Colborne is waiting at the door for him, and he wants to know the truth, and ten years later, Oliver is finally ready to tell it. Ten years ago, Oliver is one of seven young Shakespearean actors at Dellecher Classical Conservatory. Oliver and his friends play the same roles onstage and off: the hero, villain, tyrant, temptress, ingénue, and extra. But in their fourth (and final) year, the balance of power begins to shift when good-natured rivalries turn ugly On their opening night, real violence strikes and it consumes their real world lives. The morning after, the students find themselves facing their very own tragedy, and their greatest acting challenge yet: convincing the police, each other, and themselves that they are innocent.

I really enjoyed how this read. There were the parts thrown in that felt like reading a play and others were it was purely a thriller. It was a very uniquely written book. M.L Rio did a great job developing the characters and building the story! Where do life and art separate? We got a little bit of everything in this novel: loyalty, betrayal, madness, ecstasy, and then trying to figure out who they are before the end. I also loved the back and forth, and the beginning really grabbed me – when the Detective is trying to convince Oliver to tell him what really happened, it makes you want to know!

I give this 5/5 stars! It was a unique ride and one I wasn’t expecting.

7 thoughts on “Book Review: If We Were Villains (M.L Rio) @Flatironbooks @SureAsMel”