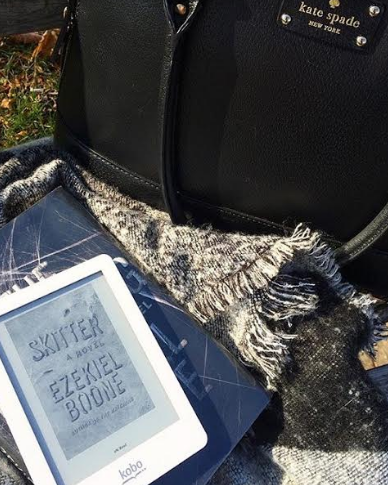 The second wave is coming…..

After reading, The Hatching (the first in this trilogy by Ezekiel Boone- you read my review for that one here),  I was  beyond excited when I was approved for Skitter.  I could not wait to read it!! I actually was lucky enough to read this book as a buddy read last NOVEMBER because I needed someone to share my thoughts with while I was reading!  I read the book, wrote the review and then waited.  I didn’t want to talk about this one too early, but I cannot hold it in anymore! This one is a seriously intense read!

This book picks up just as I believe a sequel should, right in the middle of the action. I was hooked instantly.   The first waves of spiders are all dead; seemingly perished simultaneously.   This book introduces the next wave of spider.     As the last novel focused on the outbreak of the spider infestation and the initial fear, this novel dove into the human nature element and how people are reacting to this outbreak. Rebellions breaking out, people turning against on another, the government turning against its people.   The waves of man-eating spiders are all good and scary but the human reaction to this type of stressor is the real scary part.   This second instalment also focuses largely on how to “deal” with the outbreak and the desperate attempts to figure out what is causing them.

I obsessed with Boone’s writing style. I love how he is able to create multiple characters narrating, in multiple story arcs and yet, they never become confusing.   It takes a pretty talented writer to make that work and Boone does so effortlessly. I also loved the imagery in the book was fantastic; the spider egg sacs as “ticking time bombs” and the wording surrounding the spiders and the events gave me chills.     Boone makes something so unrealistic- a giant spider invasion- feel like it is completely plausible.

The ending of this one was horrifying.   I still cannot believe I’ll have to wait to read the third instalment, but I will be waiting for it!!

Just as the first in the series, I couldn’t help but imagine how this story would play out in a movie or as a television series.  I think that would be fantastic. I really hope that someone out there catches on to this and makes it happen!

I would highly recommend this read and if you haven’t read The Hatching yet, don’t worry! You have time to catch up! Skitter will be published in April 2017.   Mark your calendars!

Thanks Penguin Random House Canada, Ezekiel Boone and Netgalley for my digital copy; it was my pleasure to provide an honest review.