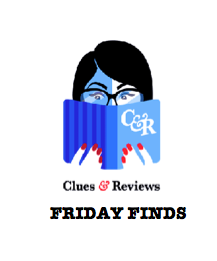 Friday Finds (a feature originated by Jenn at Books and A Beat) showcases the most interesting books that I have encountered during the last week and have added to my TBR wish list on Goodreads.

In the summer of 2006, Emma Price watched helplessly as her six-year-old son’s red coat was fished out of the River Ouse. It was the tragic story of the year – a little boy, Aiden, wandered away from school during a terrible flood, fell into the river, and drowned.
His body was never recovered.
Ten years later, Emma has finally rediscovered the joy in life. She’s married, pregnant, and in control again…
… until Aiden returns.
Too traumatized to speak, he raises endless questions and answers none. Only his body tells the story of his decade-long disappearance. The historic broken bones and injuries cast a mere glimpse into the horrors Aiden has experienced. Aiden never drowned. Aiden was taken.
As Emma attempts to reconnect with her now teenage son, she must unmask the monster who took him away from her. But who, in their tiny village, could be capable of such a crime?
It’s Aiden who has the answers, but he cannot tell the unspeakable.
This dark and disturbing psychological novel will appeal to fans of The Widow and The Butterfly Garden.

I am hooked on the concept of this one!  Fans of The Widow and The Butterfly Garden?  Sign me up!  I am always a sucker for a psychological thriller.

Every Dark Corner is the nail-biting new thriller from Sunday Times bestseller Karen Rose, and Book 3 in the Cincinnati series, following on from Closer Than You Think and Alone in the Dark.
When FBI Special Agent Griffin “Decker” Davenport wakes from his coma, he is desperate to find the missing children he knows are in danger. At the end of his last investigation, when he thought it was all over and justice had been served, he discovered that not everyone had been rescued, but he was shot before he was able to tell anyone.
Special Agent Kate Coppola has recently moved to Cincinnati. She says she’s chasing a promotion but she’s actually running away from heartache. She’s found the recordings from Decker’s time undercover and has been at his side in the hospital while she tries to put together the pieces of the crime he was investigating—and what connection it has to his own mysterious past.
When someone tries to kill Decker in his hospital bed, he and Kate realise that the children are not the only ones whose lives are threatened, and that they must stop at nothing to hunt down the perpetrators. And danger is waiting in every dark corner.

I don’t read a lot of romantic suspense but I knew I had to add this to my TBR pile after reading the synopsis!

From the author of Doing Harm, a thriller in which a grieving, vengeful husband stalks the surgeon he blames for his wife’s untimely death.
Morgan Finney, a biotechnology tycoon, is a shy, highly intelligent but socially awkward and emotionally fragile man. It was his wife, Jenny, with whom he connected and who enabled him to connect with others. When Jenny dies of complications during a surgery led by Dr. Rita Wu, Finney’s grief turns to rage. He vows to kill Rita just as he believes she killed his wife. But first he will systematically destroy her life. Aided by a mysterious man named Sebastian, Finney uses advanced medical technology to brainwash Rita. He tricks her into ruining her reputation and brings her to the brink of madness. Alone, fighting for her sanity and life, Rita reaches out to ex-lover Dr. Spencer Cameron. Together they uncover Finney’s horrific intentions and race to stop him

This one came highly recommended from some of my book blogging pals; I love the idea of a medical thriller.  The synopsis reminded me a little of early Tess Gerritsen standalone novels (which I LOVED!)

Edgar Award winner Meg Gardiner returns with a third propulsive, groundbreaking thriller about forensic psychiatrist Jo Beckett and the lies that are even more dangerous than fame.
Tasia McFarland is a washed-up country-pop singer desperate for the break that will get her topping the charts again. The tabloids have raked over every part of Tasia’s rocky life, following every high and low, her addictions, her breakdowns, her increasingly erratic behavior-and every broken relationship. The highlight of this lowlight reel: her failed marriage to an ambitious Army officer whose political talents earned him a spot in the nation’s highest office. Tasia McFarland is the ex-wife of the President of the United States.
So when Tasia writes a song with politically-charged lyrics, people take note and her star begins to rise anew. In the spectacle-driven opener of her comeback tour, she is lowered into a stadium on a zip line and as helicopters fly overhead she fires her prop Colt 45 at the fireworks-filled stage. Tasia is riding high.
Until she’s killed by a bullet to the neck, before the shocked crowd of 40,000.
When video can’t prove that the shot came from Tasia’s own Colt .45 and the ballistics report comes up empty, the authorities call on forensic psychiatrist Jo Beckett to do a psychological autopsy and clean up the potential political disaster. But as Jo sifts through the facts, she only finds more questions. Was Tasia’s gun loaded? Did she kill herself in one last cry for attention? Were her politically-charged lyrics the rantings of a paranoid woman losing her grip? Or warnings from a woman afraid and in danger? For Jo, pouring over Tasia’s past quickly becomes a race to extinguish the conspiracy rumor mill before it incites a level of violence that reaches America’s highest corridors of power-and tears apart the very fabric of our nation.

Well, there ya have it! Those are my finds from the past week.  See any that interest you?  I’d love to hear!

It’s the little things ☕️🌻📚
Still making my way through The Shape of Night. There is a sexy ghost. That’s where we are at. What’s everyone up to this Sunday? 💁🏻‍♀️#bookstagram #sundayvibes #dogsofinstagram #book #booklover #bookworm #booknerd
Don’t mind me. Just over here having the most Mondayest Monday and dreaming of my #bookstacks 🙃 #bookshelves #bookshelf #stacksonstacks
Looking at my #tbrpile this morning; I have a lot going on! Rereading one my #favoritereads The White Road by Sarah Lotz. Still moving through The Shape of Night (there is a sexy ghost...not sure how I am feeling about that). Still into The Other Mrs and I started reading The Joy of Missing Out to try and feel less guilty in my everyday life 🤦🏻‍♀️ How many books do you have going?! #currentlyreading #thewhiteroad #stacksonstacks #bookstagram #bookish #booklover #theshapeofnight
Adding another #thriller to my growing #tbrpile 🤦🏻‍♀️ Honestly, so many books, so little time! @marykubica is one of my “go to” authors and I am SOOO excited to start her newest novel #theothermrs 😍 #ilovebooks #bookstagram #book #bookish
Nothing like a little murder mystery to cuddle up with for my #bedtimereading 😴 Am I the only person who can sleep soundly after listening to #myfavoritemurder or reading a serial killer thriller? 🤷🏻‍♀️ #bookstagram #book #ilovereading