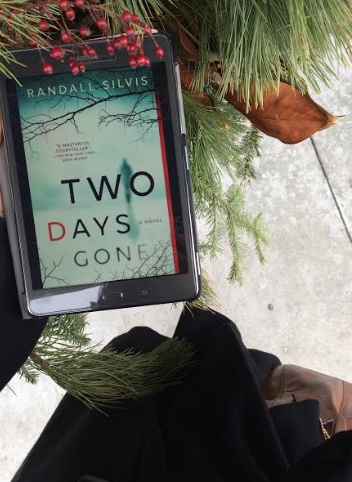 I am thrilled to be taking part in today’s stop on the blog tour for Two Days Gone by Randall Silvis.

Not only will this post contain an excerpt and my review but also link to an awesome GIVEAWAY for your chance to win a copy of the book!

Thomas Huston, a beloved professor and bestselling author, is something of a local hero in the small Pennsylvania college town where he lives and teaches. So when Huston’s wife and children are found brutally murdered in their home, the community reacts with shock and anger. Huston has also mysteriously disappeared, and suddenly, the town celebrity is suspect number one.

Sergeant Ryan DeMarco has secrets of his own, but he can’t believe that a man he admired, a man he had considered a friend, could be capable of such a crime. Hoping to glean clues about Huston’s mind-set, DeMarco delves into the professor’s notes on his novel-in-progress. Soon, DeMarco doesn’t know who to trust—and the more he uncovers about Huston’s secret life, the more treacherous his search becomes.

Randall Silvis is the internationally acclaimed author of more than a dozen novels, one story collection, and one book of narrative nonfiction. His essays, articles, poems, and short stories have appeared in various online and print magazines. His work has been translated into ten languages. He lives in Pennsylvania.

The waters of Lake Wilhelm are dark and chilled. In some places, the lake is deep enough to swallow a house. In others, a body could lie just beneath the surface, tangled in the morass of weeds and water plants, and remain unseen, just another shadowy form, a captive feast for the catfish and crappie and the monster bass that will nibble away at it until the bones fall asunder and bury themselves in the silty floor.

In late October, the Arctic Express begins to whisper south- eastward across the Canadian plains, driving the surface of Lake Erie into white-tipped breakers that pound the first cold breaths of winter into north-western Pennsylvania. From now until April, sunny days are few and the spume-strewn beaches ofPresque Isle empty but for misanthropic stragglers, summer shops boarded shut, golf courses as still as cemeteries, marinas stripped to their bone work of bare, splintered boards. For the next six months, the air will be gray and pricked with rain or blasted with wind-driven snow. A season of surliness prevails.

Sergeant Ryan DeMarco of the Pennsylvania State Police, Troop D, Mercer County headquarters, has seen this season come and go too many times. He has seen the surliness descend into despair, the despair to acts of desperation, or, worse yet, to deliberately malicious acts, to behavior that shows no regard for the fragility of flesh, a contempt for all consequences.

He knows that on the dozen or so campuses between Erie and Pittsburgh, college students still young enough to envision a happy future will bundle up against the biting chill, but even their youth- ful souls will suffer the effects of this season of gray. ByNovember, they will have grown annoyed with their roommates, exasperated with professors, and will miss home for the first time since September. Home is warm and bright and where the holidays are waiting. But here in Pennsylvania’s farthest northern reach, Lake Wilhelm stretches like a bony finger down a glacier-scoured valley, its waters dark with pine resin, its shores thick on all sides with two thousand acres of trees and brush and hanging vines, dense with damp shadows and nocturnal things, with bear and wildcat and coyote, with hawks that scream in the night.

In these woods too, or near them, a murderer now hides, a man gone mad in the blink of an eye.

The college students are anxious to go home now, home to Thanksgiving andChristmas and Hanukah, to warmth and love and light. Home to where men so respected and adored do not suddenly butcher their families and escape into the woods.

The knowledge that there is a murderer in one’s midst will stagger any community, large or small. But when that murderer is one of your own, when you have trusted the education of your sons and daughters to him, when you have seen his smiling face in every bookstore in town, watched him chatting with Robin Robertson Good Morning America, felt both pride and envy in his sudden acclaim, now your chest is always heavy and you cannot seem to catch your breath. Maybe you claimed, last spring, that you played high school football with Tom Huston. Maybe you dated him half a lifetime ago, tasted his kiss, felt the heave and tremor of your bodies as you lay in the lush green of the end zone one steamy August night when love was raw and new. Last spring, you were quick to claim an old intimacy with him, so eager to catch some of his sudden, shimmering light. Now you want only to huddle indoors. You sit and stare at the window, confused by your own pale reflection.

Now Claire O’Patchen Huston, one of the prettiest women in town, quietly elegant in a way no local woman could ever hope to be, lies on a table in a room at the Pennsylvania State Police forensics lab inErie. There is the wide gape of a slash across her throat, an obscene slit that runs from the edge of her jawline to the opposite clavicle.

Thomas Jr., twelve years old, he with the quickest smile and the fastest feet in sixth grade, the boy who made all the high school coaches wet their lips in anticipation, shares the chilly room with his mother. The knife that took him in his sleep laid its path low across his throat, a quick, silencing sweep with an upward turn.

As for his sister, Alyssa, there are a few fourth-grade girls who, a week ago, would have described her as a snob, but her best friends knew her as shy, uncertain yet of how to wear and carry and contain her burgeoning beauty. She appears to have sat up at the last instant, for the blood that spurted from her throat sprayed not only across the pillow, but also well below it, spilled down over her chest before she fell back onto her side. Did she understand the message of that gurgling gush of breath in her final moments of consciousness? Did she, as blood soaked into the faded pink flannel of her pajama shirt, lift her gaze to her father’s eyes as he leaned away from her bed?

And little David Ryan Huston, asleep on his back in his crib— what dreams danced through his toddler’s brain in its last quivers of sentience? Did his father first pause to listen to the susurrus breath? Did he calm himself with its sibilance? The blade on its initial thrust missed the toddler’s heart and slid along the still-soft sternum. The second thrust found the pulsing muscle and nearly sliced it in half.

The perfect family. The perfect house. The perfect life. All gone now. Snap your fingers five times, that’show long it took. Five soft taps on the door. Five steel-edged scrapes across the tender flesh of night.

Thomas Huston is a well-loved teacher and bestselling author; someone that many look up to. This perception is shattered when Huston’s wife and children are found murdered in their home and Huston is nowhere to be found. Sergeant DeMarco begins working the case, once a friend of Huston’s; he cannot imagine how he could have committed this crime. As he begins to dig deeper into the case, and into Huston’s life, he begins uncovering a dangerous web that will change everything.

Two Days Gone, a new mystery by Randall Silvis, begins in the middle of the action; Thomas Huston is on the run after his wife and children have been murdered. Ryan DeMarco is on the case, trying to piece together what happened and what could have pushed a man to murder his family.  I found this one caught my interest immediately, and although it slows down in the middle, the prose of this one (and the killer plot) kept me turning the pages.

My favorite part of this novel was the narrative style. The novel opens with this back and forth narrative perspective told between Sergeant DeMarco and Huston. We see DeMarco on the case and Huston on the run; as the story develops, the novel solely becomes narrated by DeMarco. I loved this technique; I found it captured my interest and then kept me wanting more since Huston’s perspective is significantly reduced as more action is introduced.

The writing, although a bleak subject matter, has moments of witty banter and some smart humour-especially regarding scenes with DeMarco.  Silvis develops this character brilliantly.

I did find that the novel dragged significantly for me near the ending; I feel like if this novel had been fifty pages less, I would have enjoyed it much more. I loved the prose at the beginnings, but I found it to be too “fluff-filled” nearing the end; I wanted more action.

Overall, I enjoyed this novel and would recommend it if you are a fan of a police procedural mystery with a twist; this one will take you on quite the journey. If you want something extremely fast paced, I would skip it.

Thank you to Sourcebooks Landmarks, Netgalley and the author, Randall Silvis, for providing me a copy of this novel; it was my pleasure to provide an honest review.

Enter to Win A Copy of Two Days Gone