I can’t believe another week has come and gone!

Friday Finds is a feature that showcases the most interesting books that I have encountered during the last week and have added to my TBR list on Goodreads.

I saw this awesome feature on It’s All About Books. Apparently, it originated from Jenn at Books and A Beat.   One of my blogging buddies, Renee at It’s Book Talk also participates.

From the author of the hit literary horror debut Bird Box (”Hitchcockian.” —USA Today) comes a chilling novel about a group of musicians conscripted by the US government to track down the source of a strange and debilitating sound

The Danes—the band known as the “Darlings of Detroit”—are washed up and desperate for inspiration, eager to once again have a number one hit. That is, until an agent from the US Army approaches them. Will they travel to an African desert and track down the source of a mysterious and malevolent sound? Under the guidance of their front man, Philip Tonka, the Danes embark on a harrowing journey through the scorching desert—a trip that takes Tonka into the heart of an ominous and twisted conspiracy.

Meanwhile, in a nondescript Midwestern hospital, a nurse named Ellen tends to a patient recovering from a near-fatal accident. The circumstances that led to his injuries are mysterious-and his body heals at a remarkable rate. Ellen will do the impossible for this enigmatic patient, who reveals more about his accident with each passing day.

Part Heart of Darkness, part Lost, Josh Malerman’s breathtaking new novel plunges us into the depths of psychological horror, where you can’t always believe everything you hear.

I read Josh Malerman’s debut novel, BirdBox, back in October and LOVED IT!  The story was completely original and was actually incredibly creepy (you can check out my review for that one here).  When I saw that Malerman was writing another book, it went immediately on my list! I don’t really know how all the pieces in the synopsis are going to fit together but I can’t wait to see what happens.

The Girl Who Lied

Erin and Roisin were once friends until a fatal accident ruined both their lives. Now, Roisin has discovered a secret—one Erin has kept for over a decade—and she’s determined to make Erin pay for her lies.

Erin wants nothing to do with Roisin. She has a new life in London and no intention of going back home. Yet when her father is mysteriously and critically injured, Erin has no choice but to return and face Roisin—and her past. Erin knows if the secret of what she gave up got out, the consequences could be devastating.

When Roisin suddenly disappears, suspicion soon lands on Erin. She would do anything to protect her family, but just how far is she willing to go when time is running out…?

The synopsis of this one got me right away.  Plus I loved the cover.  I have never read anything by Sue Fortin before but it seems to me like we will have two female leads and unreliable narration; a little bit of a Gone Girl or Girl on the Train vibe.  I am all about this!

The Secrets You Keep

From the New York Times bestselling author of The Wrong Man and Eyes on You comes a harrowing new psychological thriller about a successful self-help author who suddenly finds her life spiraling dangerously out of control.

What would you do if you realized that your new husband, a man you adore, is keeping secrets from you—secrets with terrifying consequences?

Bryn Harper, an accomplished self-help author, already has plenty to deal with. She’s still recovering from a devastating car accident that has left her haunted by recurring, smoke-filled nightmares. Worse still, she can’t shake the ominous feeling her dreams contain a warning.

In the beginning, Bryn’s husband Guy couldn’t have been more supportive. But after moving into a new house together, disturbing incidents occur and Guy grows evasive, secretive. What the hell is going on, she wonders? Then, a woman hired to cater their dinner party is brutally murdered.

As Bryn’s world unravels—and yet another woman in town is slain —she must summon her old strength to find answers and protect her own life. Her nightmares may in fact hold the key to unlocking the truth and unmasking the murderer.

With unexpected, riveting twists, The Secrets You Keep is an utterly compelling psychological thriller that once again showcases Kate White’s extraordinary storytelling talent.

I love a great psychological thriller and am always on the hunt for a great one!  I was pulled in immediately into this synopsis!  This one comes out in the spring, I believe, so it’s something to look forward to! 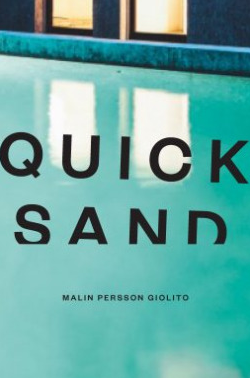 QUICKSAND is an incisive courtroom thriller and a drama that raises questions about the nature of love, the disastrous side effects of guilt, and the function of justice.

A mass shooting has taken place at a prep school in Stockholm’s wealthiest suburb. Maja Norberg is eighteen years old and on trial for her involvement in the massacre where her boyfriend and best friend were killed. When the novel opens, Maja has spent nine excruciating months in jail awaiting trial. Now the time has come for her to enter the courtroom. But how did Maja, the good girl next door who was popular and excelled at school, become the most hated teenager in the country? What did Maja do? Or is it what she didn’t do that brought her here?

What an original concept!  I don’t read a lot of legal thrillers, but I love them!  A mass school shooting and an eighteen-year-old on trial?  Sounds like it will be an intense read!

So, there you have it!  My finds for the week.  Are any of these on your TBR lists?