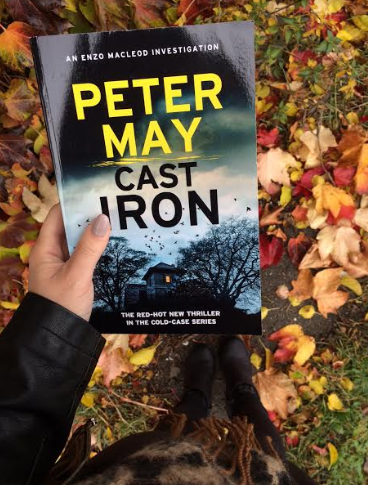 In 1989, the body of Lucie Martin is dumped into a lake in the West of France; fourteen years later, her remains are discovered. With the body destroyed and no way to prove the murderer, her case is determined to be cold. Enter, forensic expert, Enzo MacLeod, with a background reviewing these types of cases, he begins investigating her murder and soon he begins to discover secrets, secrets that threaten his own loved ones. Will he be able to stop this before it’s too late?

Cast Iron by Peter May is the sixth novel in the Enzo MacLeod series, a forensic expert who reviews cold cases.  This novel is a classic police procedural but is riddled with bits and pieces of Enzo’s personal life, allowing the reader to connect, not only with the case at hand but also with the protagonist.   Although this was my first read by Peter May, I was pleasantly surprised that I could enjoy this book as a standalone. I was initially confused at the introduction of the characters but I was able to catch on quickly. May gives such detailed descriptions of his characters and hints into their backstories that it does not end up being difficult to piece together.

I ended up genuinely enjoying the plot. May creates a fast-paced thriller with lots of twists and turns. Enzo begins his investigation into Lucie’s murder and quickly landslides into webs of secrets, landing his own daughter in peril. I found that after reading the first chapter, I was hooked. May does such a good job at hooking the reader and using characters interactions to push the plot. I was on the edge of my seat by the middle of the novel, trying to connect the dots and make sense of how the plot was unfolding.

Although I was able to read this novel successfully as a standalone, I feel as if I would have enjoyed the novel even more, if I had read the others in the series first. I liked Enzo enough that I will be going to back to read the first five in the series.

I would recommend this novel to any lovers of police procedurals or to a reader who likes to connect with their protagonist.  If this sounds like you, then mark your calendars for January 12, 2017.

I voluntarily received an Advanced Reader’s Copy of this book from riverrun Publishing, Peter May and Alice Geary at Midas Public Relations; it was my pleasure to provide an honest review.